Steve Oseka, Fire Chief for the Cairo Rural Volunteer Fire Department, has won the prestigious Bill Behrens Instructor of the Year award given by the Nebraska Society of Fire Service Instructors.  It is an award open to anyone, Volunteer, or Career, who is involved in Fire Fighting or Emergency Medical Services Instruction.

Steve has been an instructor for the Nebraska State Fire Marshal Training Division for over twenty-five years.  He has held classes on an average monthly basis and has provided his professional instruction whenever and wherever needed.  For example, he has traveled all over the state, including locations as distant as Chadron, NE.

Steve is a well-respected and highly recognized participant in the field of Fire Fighting instruction.  In addition to his classroom work and on-scene guidance, he is an instructor at the NE State Fire School, held in Grand Island every May.  He also is very active as a “train the trainer” of the local Cairo Rural Volunteer Fire Department.

Cairo and Nebraska citizens are blessed to have this hard-working and dedicated Professional Firefighter and Instructor…always on duty, on our behalf. 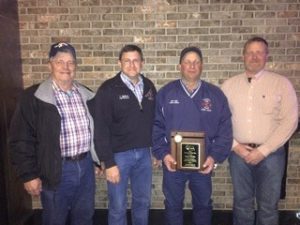