The Centura Dance Team will be presenting a Dance Revue on Sunday, March 13th at 7:00pm in the Centura High School Gym.
The Dance Revue will feature several dance performances from the year. Some of the encore pieces will be the “High School Musical” routine with the Centura Boys; as well as the team’s State Runner-Up Jazz routine and State Championship High Kick routine. The members of the team are also very excited to present a brand new Dads and Daughters performance.
Along with the dance performances, several other Centura students will be featured. Grace McDonald, Paige Reimers and John Kortz will all provide some musical entertainment during the Revue. 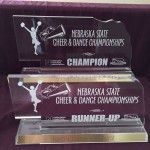 After the Revue, attendees are invited to stay for dessert served by the Centura Dance Team.
Free will donations will be accepted throughout the evening to help defray future costs the dance team incurs such as dance camps, uniforms and competition expenses.