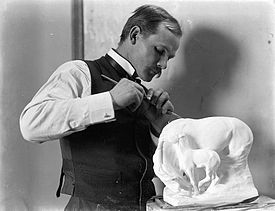 The marketer will be posted near the land where Solon Hannibal Borglum once lived and ranched.  It was there on his father’s section of land that he developed a love for the West, horses, and the cowboy way of life; and also a respect and admiration for Native Americans.

While living on the ranch he started taking art classes in Omaha.  It is documented from local newspaper accounts that Borglum carved a large image of a Native American in the Bluffs at St. Michael just west of the Borglum ranch.  That image was still visible as late as 1906.

In 1890 Solon Borglum’s brother Gutzon made a visit at the ranch on his way through Nebraska, and encouraged his brother to be an artist.  Gutzon had been studying art in California at the time and was on his way to Omaha to visit his parents.

Many years later, Gutzon Borglum became famous for sculpting Mt. Rushmore in the Black Hills of South Dakota.  Many believe he was first inspired to do such a monumental work after seeing his brother Solon’s carving in the Bluffs  a few miles west of Cairo.

Solon Borglum became world famous as a sculptor himself after studying art in Ohio and Paris.  he became known as the “Sculptor of the Prairie.”  he is known for his sculptures of cowboys, horses, Native Americans, etc.

The Cairo Roots Museum is seeking funding to erect the historical marker.  It will cost around $6,000.  The wording for the marker has been approved by the Nebraska State Historical Society and the Nebraska Department of Roads has agreed to provide a turnout on the north side of Highway 2. 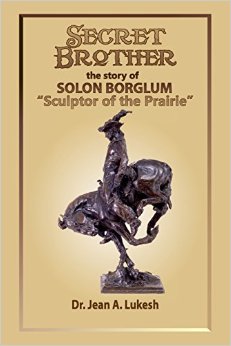 Dr. Jean Lukesh has written Secret Brother the Story of Solon Borglum “Sculptor of the Prairie.”  Dr. Lukesh will be available to answer questions and autograph her book at the Follow the Rails Art Trail October 16 & 17th at the Cairo Community Center.  A donation box will be on site to collect free will offerings towards the purchase of the historical marker for Borglum site on Highway 2.  Details are available at http://followtherailsarttrail.com